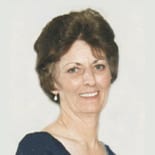 Wanda Cross began working for Friends Research Institute (FRI) in 1964 at the young age of 19. She continued to work with FRI for 54 years, which is quite an amazing achievement these days. During her tenure with FRI, Wanda initially worked in the accounting department as a bookkeeper and over the years, after gaining more experience and knowledge, became the Financial Administrator. She single-handedly oversaw the accounting department for most of her time working at FRI. Wanda was known as an extremely hard worker, being 100% dedicated to her job and FRI, and for being meticulous with respect to details. Wanda officially retired from FRI in 2016; however, she continued working with FRI on a weekly basis for another year and a half to help train the new accounting staff and oversee their work to ensure FRI’s accounting department remained in good order.

Wanda was a loyal employee and friend to many who worked at FRI. She enjoyed spending time with family and going to her cabin in Pennsylvania for long weekends. She is survived by her daughter and two granddaughters, all of whom she cherished. She will be deeply missed by those who worked with her at FRI.